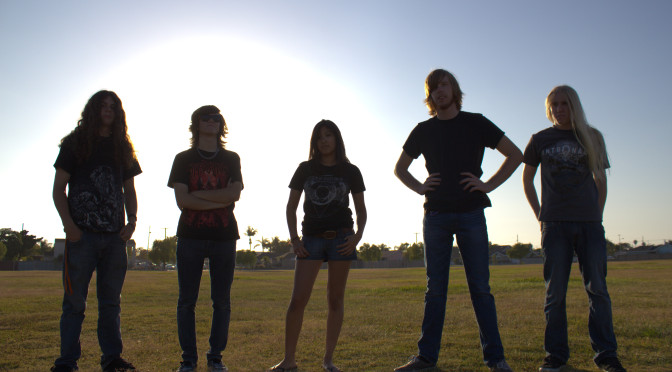 Demise of Itylus began as a collaboration between me and James Goldmann and has since come full circle.  I had a set of metal songs written since 2007 and for all of high school tried to find a group I could vibe with while playing them.  It wasn’t until my senior year that James and I started jamming together and everything fell into place.  We recruited long time friends Tamara Win on bass, Paul Parcell on rhythm guitar, and later Aaron Stechauner on drums to play along with us and played several more shows over the course of the next year.   While we expected going away to college to end the band, it actually inspired us more, and me and James worked on The Nightingale together, releasing it in January 2011 after just our first semester in college.

The Nightingale is a refinement of my collection of old songs, all wrapped up in a semi conceptual album. We chose the myth of Itylus for our name somewhat arbitrarily but found some deeper meaning in it.  In the myth, Aedon, Itylus’s mother, plots to kill the eldest of Niobe’s six sons and accidentally kills Itylus instead.  Zeus then transformed her into a Nightingale, singing melancholy songs grieving the death of her child. When reading this myth one asks themselves how it is even possible to commit the egregious error of killing your own child.  We found ourselves asking a similar question about the rise and fall of civilizations.  It seems so impossibly careless to destroy something you have so painstakingly created, but through a mix of jealousy, irrationality, and anger, the process through which this happens becomes clear.

The following summer, we wrote new songs and played shows even more extensively at Southern California venues such as The Glass House, Chain Reaction, The Galaxy, and Mirror Image Studios.  While the Nightingale was inspired by thrash and melodic death metal, our new music had a much more progressive and technical influence.  However, eventually school, life, and other musical projects had us playing less and less frequently, despite having our entire second album written and ready to record.  These days, Aaron is playing drums for metal bands such as Rings of Saturn, Abiotic, Aenimus, and Dylan Furr, while James also plays drums in the punk band Struckout. Me and James have continued working on our second album, as well as having sketches of our third and fourth.

Currently in the works:

II. Bears As Far as the Eye Can See

III. Theatre of the Absurd

IV. There is Beauty in Sorrow